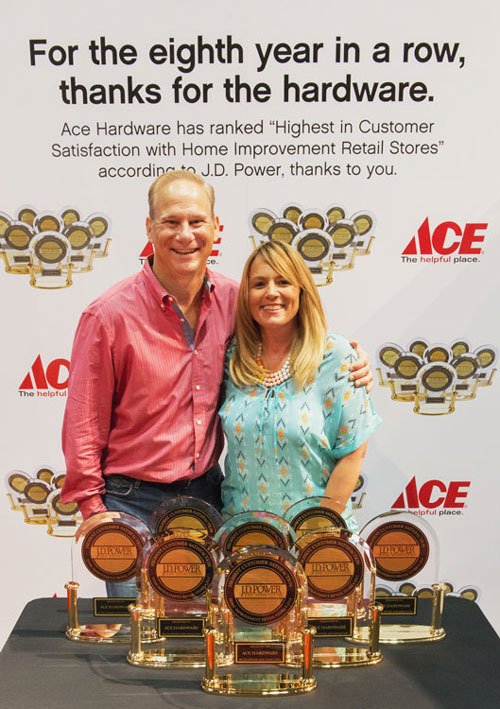 Jabo’s Ace Hardware is a locally owned and operated business by Bill & Renae Jablonowski. We bought our first store in June 2005, however this wasn’t our first go around with Ace Hardware, in fact this was more like the culmination of a life long venture. Bill started working at a premier hardware store, Elliott’s Ace Hardware, in West Allis, WI in 1984 when he was in high school. Bill worked there through college and upon graduation followed his nose, applied and was subsequently hired by Ace Hardware Corporation in Oak Brook, IL. Bill & Renae and our first child Alyssa made the move to Illinois in 1989. This would be the first of six relocations we would put our family through as we grew with Ace. We added two more kids to the family, Zachary and Caitlyn along the way. During our 16 years with Ace, Bill continued to grow in various capacities learning from some of the best Ace retailers across the county on how they ran their businesses. Bill was attracted to the hardware business for many reasons, but one of the most compelling reasons was because in all his travels and tenure with the company he was continuously impressed with the quality of the people. Customers, owners, store associates, corporate support staff and vendors alike seemed to fall into a similar category of “salt of the earth” type folks. Because of this, Bill could see this was the kind of business he would like to build a future around and one he would be proud to pass on to his family some day down the road.

So after a close friend kept nudging Bill to follow his dream of owning a hardware store (some might call it more of a shove since it was more like – why don’t you just be quiet, stop talking about it and put your money where your mouth is) we finally sat down, scrapped together every last dime we had and began in earnest to plot our course. After spending the better part of a year trying to find a location for a new store in the Dallas/Fort Worth area where we had family living for years, we ended up buying Coppell Ace Hardware in June 2005 and relocated our family for the very last time. Texas was to become and will always be our home. Renae with an insurance background and a creative knack for finding and sourcing products people want to buy quickly jumped into the hardware business and never looked back. This was her first official foray into the business but having spent her entire married life with Bill wrapped around the business, this wasn’t her first rodeo either. She didn’t waste any time pumping new life into our recently acquired business. A complete overhaul of the business began in August 2005 that culminated in the store that it is today. At first many of our customers didn’t like the fact that we were changing things around but once we wrapped it up and they quickly found out we had more to offer than ever before and we were off and running.

Since our initial plan was to open a new store, lease opportunities kept flowing our way. So when the chance came to secure a spot in the Keller Crossing Shopping Plaza as the lead anchor we jumped at the opportunity. In February 2007, we opened our second store in Keller, TX. As a new store, the question of what to call the store came into play. Well with a last name like Jablonowski, there were far too many letters to put up on a building due to cost alone, so after much deliberation we went with a nickname that had been following us around for years. Jabo (pronounced Jah-bo) became the nickname of choice. Bill and the kids had picked up this nickname over the years and thus, Jabo’s Ace Hardware was born. The Keller store was established with Bill and Renae’s vision of the kind of prototypical store they would like to operate. A grass roots hardware store with a lot more to offer than just the basics, it’s why the store has a collegiate corner, gas burning fireplaces, a 6,000 square foot garden center and a whole lot more. We carry additional product lines like Benjamin Moore paint, Stihl Power Equipment, Weber grills, Webkinz, Mrs. Meyers and a whole variety of others in addition to some 30,000 hardware sku’s. Renae likes to call some of these additional categories and niches “retail therapy” rather than retail shopping areas. Additionally if you can’t find it at any of our Jabo’s locations just ask, if we don’t carry it, we’ll try their best to find it for you.

In August 2008 we bought our third store in Fort Worth. Jabo’s Westcliff Ace Hardware. Another long standing great hardware store located just south of TCU’s campus in Fort Worth. Following the footsteps of our first acquisition, this store was completely retrofitted in early 2009 and is better organized and as consumer friendly as ever. Benjamin Moore paints, Stihl Power Equipment and some of Renae’s retail therapy categories were added to round out the product selection at the store. If you live around this store and haven’t been in since the remodel, come on in and see what you’ve been missing!

Well at the end of the day and with all this being said, none of this would be possible without the help and support of our entire family, our outstanding staff and our loyal customers who have made Jabo’s Ace Hardware the success it is today. Thank you!

We look forward to future growth and delivering on our primary aim which is:

To ensure that our Customer’s leave our store saying “WOW!” …

At Jabo’s Ace Hardware we strive to be the MOST HELPFUL HARDWARE STORE in our Community!